So although, I have a fondness for all things witchy, as a Vegan parent, Halloween did raise my anxiety levels every year as October approached. When my daughter was younger, it was not too tricky, as she did not really have much of a taste for candy, and was vegetarian, not vegan at that point, and so would still eat ‘some’ chocolates here and there… And so, back in those days, we would go door to door with some cute witch, cat, Victorian Ghost or Monster High type get-up and knock on some doors. Ahh …Those were simpler times… 🙂

However, as my daughter has grew older, it became a little trickier: When she was around 8-9-10 yrs and still leaning towards the more introverted and did not feel up to going out in a group to Trick or Treat, we instead had a dance party in the house, dressed up, put on monster music and baked gross-looking snacks to eat – and we would take it in turns to answer the door and hand out treats to all the neighbourhood ghouls. This, it turned out, was as much fun for my daughter as going out herself… 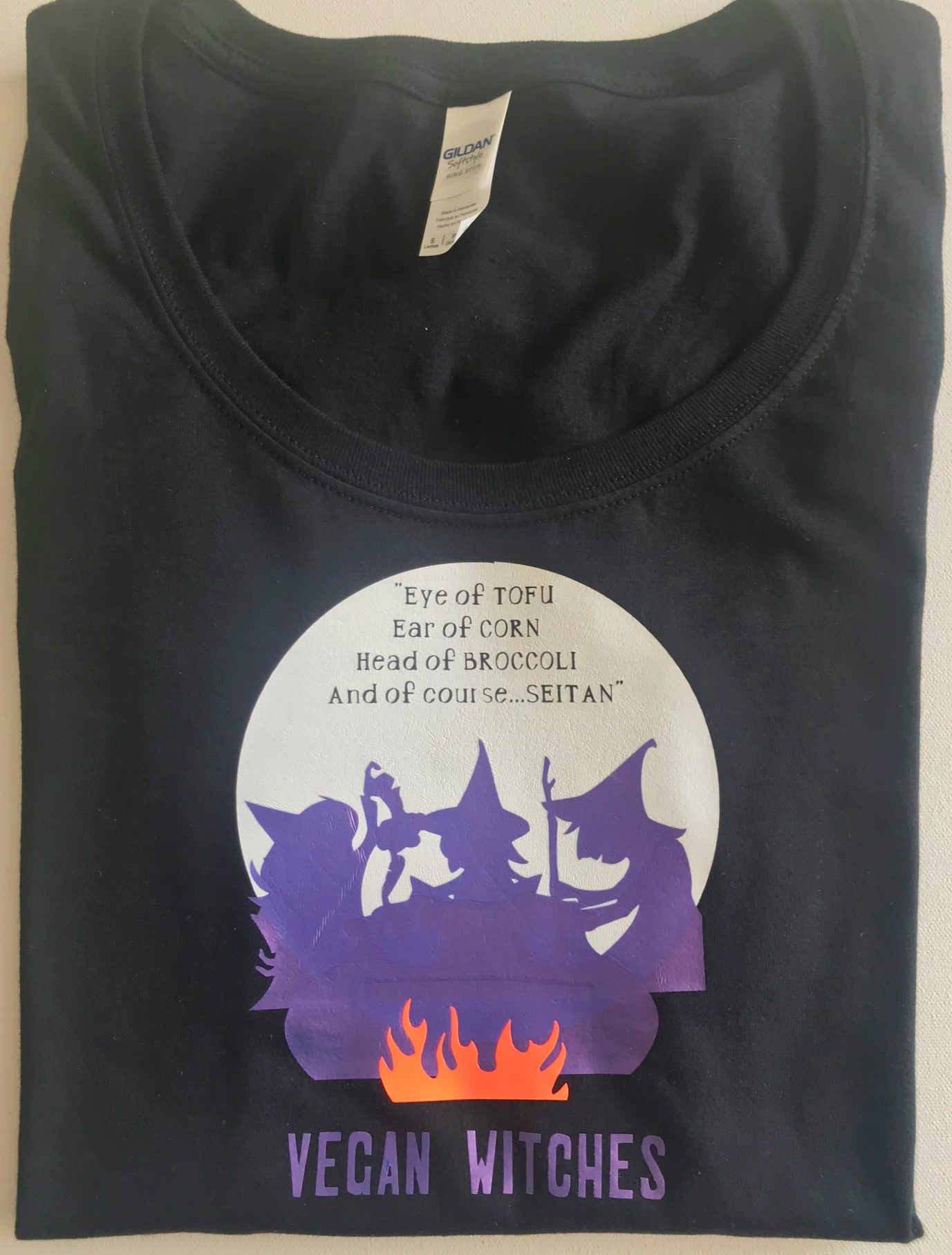 A couple of years ago, when she would have been around 11 yrs I think, it got a little trickier: “What is the point of going out trick or treating, when I won’t be able to eat anything, anyway?” was the cry. I saw her point, but she also was missing out on the social aspect – and at that stage, her friendships were extremely important to her, so it wasn’t really cut and dry – she felt conflicted. That year, she had a friend come over, and I made vegan chocolate ghosts, as well as other treats, and they watched some Halloween appropriate movies. It seemed to go OK, but I later learned that she then felt guilty that she had stopped her friend from Trick or Treating.

This last year, at 13yrs, she went out in full costume and joined in with a group of friends. I think she had reconciled in her mind that she “really didn’t care about the candy…” and that it was more about hanging with her friends, and at the end of the night, she simply (and happily) let them take most of her ‘treasure trove’. And this was fine by her. So things worked out in the end. And I have to say: I am actually quite glad/proud that she is not obsessed by candy and does not have a particularly sweet tooth (for now, of course: – who knows what the future holds, huh?!). 😀

So that is our journey so far, as a Vegan family dealing with Trick or Treat Night…but what about the other side: What about the ‘treats’ YOU are expected to give out, as a vegan parent?

Hmmm … can be tricky, that one!

If you want to stick with your principles and only offer vegan treats (and I am one of those, for my sins!), then although the choices are a little limited, you can still find things. My ‘go-to’ is the good ol’ lollipop! Many of them are accidentally vegan (but check online first to confirm – remember: red food colouring is often not vegan (nor vegetarian), for example). Over here in Canada, I can get vegan fruit lollipops in a bag of about 20 or 30. London Drugs used to sell packets that state vegan and natural on the bag. I just buy a bunch of those, usually, and stick them in a pumpkin bowl. I believe some of the Chuppa Chups are vegan too (I will try to find a link to confirm, though)…. And our grocery store offers pick and mix of those, so you can cherry pick the vegan ones! Some of the harder candy are accidentally vegan too..There are plenty of resources online, but to be sure, check with someone such as PETA, or your local/national vegan/vegetarian society).

I also have those little moulds for chocolates (Bulk Buy I think), with ghosts and witches – and I get vegan baking chocolate , melt it, pour it in and add a stick before they set in the fridge, and voila: Vegan Choc lollies for daughter and her pals! I wouldn’t personaly, hand those out to kids though, as they are likely to go back home covered in it! 🙂

Now another thing to mention is the whole Teal Pumpkin movement – which is a great idea, and I have to admit, I only heard of it a few yrs ago: https://www.foodallergy.org/our-initiatives/awareness-campaigns/living-teal/teal-pumpkin-project

Teal Pumpkin is to remind people of food allergies, etc., during Hallowe’en and encourages alternatives to candy, such as small non-food gift treats, instead. The idea is that you place a teal-coloured pumpkin in your window/doorway to show that you are handing out/accepting alternatives to food. The site link above goes into a lot more detail than I could ever hope to attempt. But I do think it is a really good idea as an alternative for vegans and those with allergies etc.

And finally, another option (pre- (and hopefully, post) pandemic) would be to throw a Hallowe’en party, invite a few of your favourite witches, ghouls, ghosts and goblins and you can then make all the amazing vegan goodies/Witches’ Brew yourself! 🙂

So there are some ideas for not getting your broomstick in a twist this Hallowe’en… have an enjoyable, safe and spooky ol’ time, whatever you do! 🙂

Check out the new Halloween Tee shirts and accessories at Veggie Planet Clothing!

My Veggie/Vegan Clothing and Accessories Shop!